Podcast – Episode 0076 – The Dangers of Schadenfreude

In this episode Joel and Antonia talk about the dangers of Schadenfreude (pleasure derived from another person’s misfortune) and apply it to the recent Ashley Madison scandal.

In this podcast on Schadenfreude you’ll find: 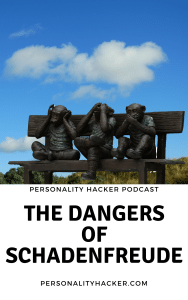