In this episode Joel and Antonia talk about using your personality type to reevaluate your beliefs.

The one thing that feels the most sacrosanct to most people is their belief system or worldview.

Our world view/belief system is the filter thru which we experience reality.

Some people’s world view is chosen for them. And they prefer to keep that inheritance untouchable.

They are allowed to ask any question they want as long as their belief stays the same. The answer must be the right answer.

Antonia and Joel didn’t feel permission to question their worldview or belief system and because of that, they found themselves in miserable situations.

It’s not what the belief system is, it is whether or not we are allowed to take an aerial view and observe it from a dispassionate space. Then ask ”Why is this belief system the emergent of all the systems I have running in my life?”

We may hit a glass ceiling when limited by a paradigm. Growth can only go so far if you aren’t allowing yourself to take a meta-perspective.

Taking in more territory as our worldview will spur our personal development forward.

Sometimes, we instinctively know if we reevaluate our belief system and look at it critically, it may not hold water.

There are a lot of incentives not to go down this road. But if you do give yourself permission to explore this path, at the end of it is a place of sovereignty.

That may include staying in your worldview. It is whether or not you feel full sovereignty to examine your beliefs critically.

A fish doesn’t know it is in water because it has only known water as its reality. It is hard to question something when you are in the midst of it. It takes one degree of separation to look back at your environment critically.

Our Perceiving process is not the best way to evaluate our worldview. Our Judging process is going to be a better evaluative process because it is how we evaluate everything and determine how important it is.

It’s how you decide if your life is turning out the way you want it to.

The Judging process brings the ‘should’ statements.

The Perceiving process is fundamentally passive.

When we decide to do anything we are doing it from our Judging process polarity, which is fueled by the info we take in through our Perceiving process. The judging process makes the final decisions.

Antonia’s Judging polarity is Ti/Fe (all TPs and FJs):

Polarity around what makes sense and what gets everybody’s needs met. Fe is Unspoken social contracts. Rules we create socially. Ti couldn’t give two craps what anybody thinks. It wants clean data, but it still plays around with belief.

Joel’s polarity is Fi/Te (all FPs and TJs):

Fi is interested in the right, moral, ethical action. Te is interested in what gets the job accomplished. Less concerned with ethics as much as efficiency. Fi is very convicted. Te wants things playing out in the outside world in a way that’s efficient.

No cognitive function is an island. The polarities contribute to each other.

If this were playing out on a global level, would everyone be harmonious?

If people seem happy, but we are ignoring truths it is not sustainable. The truth will demand its day in the sun eventually.

Or, if you believe something that makes sense but it is making everyone miserable, that is also not sustainable.

So, how does your belief system satisfy your Judging functions?

Don’t just assume your belief system meets the criteria because you have never had one degree of separation to objectively analyze your system.

It’s better to be in a place where you don’t have answers than to have answers you recognize may not be true. That’s the definition of cognitive dissonance. Holding incongruent beliefs and ignoring what it is doing to you – causing stress.

The same mechanics you used to get over believing in Santa Claus are similar to getting over your belief system.

Fi/Te (FPs & TJs) – Your belief system may not be working out in the way it was supposed to. When it stops working (Te), you start asking yourself if it is authentic to who you are (Fi).

The worldview may be working on the surface, but then you go to bed at night with a feeling like you are dying a bit inside. You aren’t showing up as your true self. A piece is missing from the ideal. The resonance is missing.

ETJ Can show up as a feeling of repression. Dishonesty with self.

Ti/Fe when they feel like they can’t be intellectually honest they can’t sleep at night.

Te/Fi if they cannot show up as an individual and be honest that will be a burr under their saddle.

When pain points come up, and you don’t want to reevaluate, it can turn inward, and an individual can start pummeling themselves for not being a better performer.

A lot of us have a lot of ego attached to our belief system. It becomes part of our identity. It is hard to admit we have been wrong for the majority of our life. Let go of that. Embrace the foolishness of growth. It’s more foolish never to change.

The roadblocks the various judging functions encounter when they start to reevaluate a belief system:

Fi – Has to abandon a part of their identity.

Ti – Appears stupid for believing something that was wrong.

Fe – Has to destroy relationships it has built around the belief system.

Te – Has to destroy all the systems it has created and build new ones. A lot of work. Not energy efficient.

Reluctance to abandon a belief system is tied in with how much you have invested based upon your Judging process.

The more you have invested, the less likely you are to reevaluate, and the bigger ego hit must be endured.

Or, you may have bought in and invested so much to your belief system that you have reached the end of your return on investment. There is nowhere else to go, so a new path needs to be found. 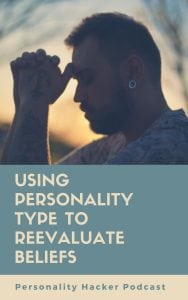