In this episode, Joel and Antonia continue talking through the personal story of Antonia actually attempting to make peace with her parents. 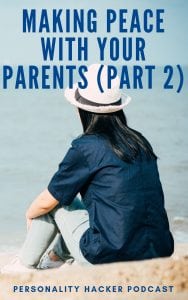