In this episode, Joel and Antonia use three frameworks (personal – relational – career) to reflect on the past year of personal growth. 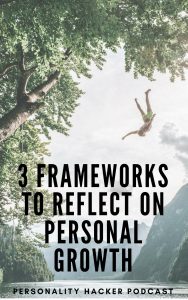