In this episode Joel and Antonia dive deep into the needs and desires of the ISTP personality type.

In this podcast on the ISTP personality type you’ll find:

ISTP – Accuracy/Sensation in the Genius system

Lots of responses to our type surveys. Each type varies wildly from person to person.

There are trends around interests and values but each person is an individual.

Our levels of development vary wildly as well.

The driver process is Introverted Thinking (Ti), which we have nicknamed “Accuracy.”
Accuracy is ISTPs flow state.

Accuracy is concerned with what makes sense to the internal world. They are detached from the messiness of relationships and emotions. It asks, What makes sense logically?

Accuracy is a decision-making style, so they have very specific ideas on how the world should be. For people who use Ti, all “should” statements come from logic and subjective analytical sense.

This concept of Accuracy is not married to pattern recognition like it would be for an NTP.  And it’s not a secondary, or conscious, process as for ESTPs. It is the driver for ISTPs and it is married to Extraverted Sensing (Se) = Sensation.

The co-pilot is Extraverted Sensing (Se), which we have nicknamed “Sensation.”

Se is in the moment. Concrete. Information gathering process that is based upon what is verifiable. What are my senses picking up? What can I personally engage with?

So if you couple logic with concrete sensation, you get somebody who is particularly skilled with things that are data heavy and real – i.e. machines.

ISTPs frequently get the nickname mechanic because they just have this intrinsic sixth sense ability to understand how machinery works.

Machines can be mechanical, or organic. But they are physical.

ISTPs talk about having a natural knack for understanding how cars work, or how the human body works, or how airplanes work.

They have a desire to be competent and perform. They are looking for leverage points, or small actions that will have big results.

When ISTPs are really interested in something it is to understand something in order to improve its performance. Not just mechanics, but people who soup up engines.

Often found in high end athletic competitions. High number of ISTPs among Olympic athletes, surgeons, pilots, and race car drivers. Not just about mastering the understanding of the different  kinds of machinery, but it’s about being uber competent at it. The best!

Ti is good at focusing. Pinpointed, focused precision. Going toward it. Finding the leverage points to get to that uber competence.

ESTPs and ISTPs are a little different with this. Se is super in touch with own body. Mind mapping their brains to encapsulate their bodies is heightened with Se users. Lots of elegance in  understanding how the body works.

ESTPs perfection comes over time since Ti is copilot. Since ISTPs lead with Ti, they already think in terms of performance points and tweaks that have huge gain coupled with physical elegance (Se).

ISTPs are not as elegant as ESTPs but they are more focused. Greater commitment to the nuanced differences. ISTPs are most likely the gold winners because of this focus.

Not all ISTPs are peak performers, of course, but they can be.

Some of the best rock drummers are likely ISTPs.

Driver is Ti. copilot is Se.

ISTPs 10-year-old process is Introverted Intuition (Ni), which we have nicknamed “Perspectives.”

Ni is about being in touch with how the mind forms patterns. Watching your own thoughts and understanding how these sixth senses come to you. Future paced. Gets into other’s minds. Can look like ESP.

As 10 year old it is conscious but unsophisticated. ISTPs who overly rely upon this process can get a little paranoid. Fear of the future. Paranoia of other people’s intentions. “Nobody likes me.” Hypervigilance. Always ready for someone to attack.

ISFPs worry about the dangers of the world. More abstract.

ISTPs want to be ready for any physical altercation – both genders.

Conspiracy oriented. Not checking in with Se which is focused on reliable and verifiable. Ni is a projection of reality. A possibility of what reality could be. If an ISTP spends too much time in Ni instead of Se, they are not in their best self. They are not focused on a goal. They are hiding and withdrawing from reality. they assume people are out to get them.

If an ISTP is working on perfecting a craft and not relying on outer world feedback, their tweaks will be off because they are relying upon  the self instead of reality.

If you want to engage with the outer world as a peak performer you have to be engaging with the world and measuring it. If you get too much into ‘what if’ scenarios, you don’t make any progress.

Don’t let yourself withdraw from the world. One reason an ISTP might withdraw is because when they get out into the world they bump up against the world’s feedback which reflects back their 3 year process.

The 3-year-old process is Extraverted Feeling (Fe), which we have nicknamed “Harmony.”

Fe is all about relationships and social status and caring about other’s needs.

This is going to sound like useless drama to an ISTP. They are blind to social contracts. They put their foot in their mouth and they don’t understand why.

They speak truth and don’t understand why truth is not socially acceptable.

Ti is about recognizing data and info separate from human feelings.

They may think everybody else is an idiot.

They don’t get emotional interplays.

Some ISTPs project that they’re not like everybody else. Lots of tattoos. Dye hair outrageously. Piercings. ISTPs couldn’t care less if you’re shocked. They want you to know they are not going to play by your rules.

Se gives plenty of opportunities for Fe, so an ISTP may avoid Se copilot to avoid outer world feedback.

A good example of how Ni can combine with Se is illustrated by a quote from Wayne Gretzky, “I skate to where the puck is going to be, not where it has been.”

Ni needs to be in service to Se. Never the reverse.

Growth path for ISTPs is utilizing Cognitive Functions in a specific way:

ISTPs who really develop their skills become well respected, which is a healthy use of Fe. If an ISTP doesn’t feel respected they will get pulled into the drama of Fe and stop seeing things in accurate terms. They will stop seeing logic and get drawn into the games people play, even though they will never become very good at it.

ISTPs can do just about anything. As they show up as better versions of themselves they gain the admiration of others.

How do you know when you are being pulled into Fe dram? Check in with negativity thermostat. If you are being hypercritical in every situation, you are reacting negatively. They have stopped seeing the world in terms of possibilities and instead see it in terms of potential disasters.

Value around being honest is a good way of gauging how developed an ISTP is.

Se also helps get them out of Ni which may be convincing them they have to lie.

Se gives ISTP an opportunity to engage in neutral zone. They can go out and engage with the world and gain distance from the social game while they are perfecting their craft. A place to rest while building competence.

Women ISTPs lead with Ti, opposite of most other women. So ISTP women have struggles around other women. they get really athletic or sporty to compensate. ISTP women are very desirable. There is beauty in what you are because you aren’t like other women. You’re not traditionally feminine, but that doesn’t mean you are less feminine. 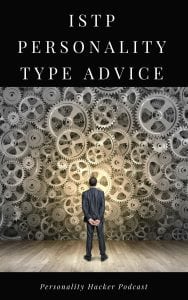