In this episode Joel and Antonia talk about the Myers-Briggs dichotomies and how they play a role in romantic relationships. 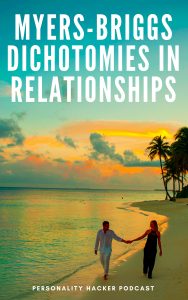