In this episode, Joel and Antonia introduce the “Personality Hacker FIRM Model” and how it helps us understand personality type fixations. 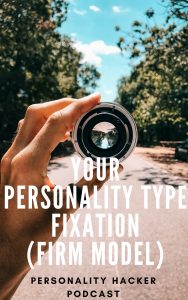